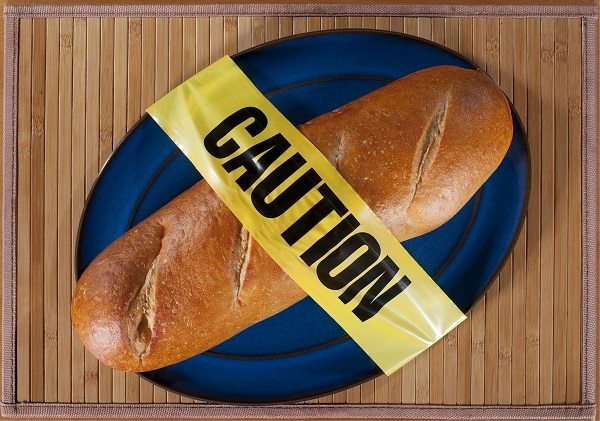 Is gluten harmful to the body or can it be beneficial? The quick answer is that it can be either, but it all depends on the individual. Research has also found that people (without celiac disease) that follow a ‘gluten free’ diet or work to eliminate gluten from their diet are increasing their risk of heart attack, stroke, heart disease, obesity, metabolic disorders, Type II Diabetes, vitamin B, iron and magnesium deficiency disorders and lowering their overall heath.

Gluten is a naturally occurring protein found in some grains and other sources. It helps hold food together and adding a “stretchy” quality. Without gluten a ball of dough would rip easily when kneaded or stretched.

Gluten is primarily found in grains such as barley, rye, spelt and wheat. It is also sold as wheat gluten, or seitan, primarily used as a high-protein vegan food. Other sources of gluten include wheat berries, durum, emmer, semolina, farina, farro, graham, khorasan wheat, einkorn, and triticale (a blend of wheat and rye). Less obvious sources of gluten include MSG (monosodium glutamate), soy sauce, lecithin, and modified food starch. Occasionally gluten occurs in other sources such as oats, medications and vitamins (from cross-contamination or the use of wheat starch as fillers or in the coatings).

The History of Gluten in Human Diets

Over the course of human evolution gluten has become a staple of the human diet following the domestication and farming of barley, rye, and wheat about ten thousand years ago. Gluten became abundant in the food supply with the advent of wheat-containing foods; wheat alone is responsible for providing over 20 percent of the worlds caloric intake. Despite humanity’s significant reliance on gluten for thousands of years, in the last few years there has been extensive negative media attention on wheat and gluten. This has led to various fad diets created solely on the exclusion of gluten, most without regard for ensuring a balanced intake or examining total caloric consumption.

Whether the media attention and fad diet crazes were spawned by food manufacturers or if food manufacturers just cashed in on the fad by prominently labeling their gluten free foods is unclear. What is clear, is that the labels on gluten free food products continuously reinforce the false belief that we need to avoid gluten.  Buy this because it’s gluten free!  These ads are conveyed in a way that the average consumer starts to believe he or she needs to start avoiding gluten.   The wording of the advertising, combined with the bombarding on social media of memes and articles bereft of actual scientific or medical based data, has caused many people to doubt gluten’s place in a healthy diet and even to consider gluten as a health risk. Without looking for any validity or reason for their new opinion, most people cannot directly explain their avoidance of gluten or why they think it is not healthy beyond pointing out that healthy food products do not contain gluten.

When having this discussion with others, especially die-hard gluten avoiders, one reason for gluten avoidance is sometimes given: gluten was never part of the human diet and it comes from the highly processed foods… basically we are allergic to it since humans did not evolve consuming gluten. That statement is extremely incorrect for multiple reasons!  Gluten has been a large part of the human diet throughout most of human evolution.   We didn’t discover or create gluten in the past few decades.  Additionally, while processing foods can cause cross contamination of naturally gluten free foods with gluten, processing foods does not actually create gluten.  And further, only about 1% of the population is truly allergic to gluten which has nothing to do with the evolution of gluten consumption. This minor example is an illustration of how pervasive and complete the misconception on gluten has been.

One other source for our newfound gluten allergen aside from packaging and social media is the influence of celebrities.  There are a few, often very thin, celebrities who have publicly shared their medically diagnosed Celiac Disease and their symptom relief by avoiding gluten.   The avoidance of gluten is a medical necessity, not a diet.  However, like many trends and fads, the reason behind the gluten avoidance is lost and thousands of us are now eliminating gluten too.

But beyond the perpetuated social media and commercial pressure to avoid gluten at all costs and buy premium priced gluten free products for their health, there is little published research to support these health risk claims, or media induced fears; in fact published research suggests the opposite.

In a 2017 study of over 100,000 participants without Celiac disease, researchers found no association between long-term dietary gluten consumption and heart disease risk. In fact, the findings also suggested that non-Celiac individuals who avoid gluten may increase their risk of heart disease, due to the potential for reduced consumption of whole grains.

Many studies have linked whole grain consumption with improved health outcomes. For example, groups with the highest intakes of whole grains including wheat (2-3 servings daily) compared with groups eating the lowest amounts (less than 2 servings daily) were found to have significantly lower rates of heart disease and stroke, development of type 2 diabetes, and deaths from all causes.

Gluten may also act as a prebiotic, feeding the “good” bacteria in our bodies. Arabinoxylan oligosaccharide is a prebiotic carbohydrate derived from wheat bran that has been shown to stimulate the activity of bifidobacteria in the colon. These bacteria are normally found in a healthy human gut. Changes in their amount or activity have been associated with gastrointestinal diseases including inflammatory bowel disease, colorectal cancer, and irritable bowel syndrome.

Some people (about 1% of the world’s population) react differently to gluten. For those individuals, the body senses it as a toxin, causing one’s immune cells to overreact and attack it.   This is diagnosed as Celiac Disease.  If a person with Celiac disease continues to consume gluten the resulting effect from the body’s attacking the gluten protein is inflammation. The effects this can have on the body range from mild (bloating, fatigue, diarrhea and alternating constipation) to severe (malnutrition, intestinal damage and weight loss).

Celiac disease, like most inflammatory disorders is classified as an autoimmune disorder. In America approximately 1 in 133 or about 1% of the population has Celiac disease.  Interestingly, about 83% of those people who truly have Celiac disease (so most of that 1%) are undiagnosed or misdiagnosed with other conditions. And a gluten-free diet is the primary medical treatment for Celiac disease and may even may reverse the damage caused by the disease.

However, understanding and following a strict gluten-free diet can be challenging, possibly requiring the guidance of a registered dietitian to learn which foods contain gluten and to ensure that adequate nutrients are obtained from gluten-free alternatives.  Other conditions that may require the reduction or elimination of gluten in the diet include:

What is most important to really understand is that gluten is a problem only for those who react negatively to it. Much like nut or other allergies, it is something that one should consider when there are corresponding symptoms.  In fact most people (about 99% of the population) can and have eaten gluten most of their lives, without any health issues or side effects.   In fact removing all gluten from your diet when you do not have a medical reason to do so has substantial more side effects.

This is essentially a diet that removes all foods containing or contaminated with gluten. However, since gluten-containing whole grains contain fiber and nutrients including B vitamins, magnesium, and iron, it’s important to make up for these missing nutrients. Along with consuming naturally gluten-free foods in their whole form like fruits, vegetables, legumes, nuts, seeds, fish, eggs, and poultry, the following whole grains are also inherently gluten-free: Amaranth, Corn, Buckwheat, Millet, Oats (when not cross-contaminated during growing or processing), Quinoa, Rice (red, brown or black), Sorghum or Teff.

It’s also important not to rely on processed gluten-free foods that may be high in calories, sugar, saturated fat, and sodium and low in nutrients, such as gluten-free cookies, chips, and other snack foods. Often, these foods are made with processed unfortified rice, tapioca, corn, or potato flours.

The gluten-free food industry has grown 136% from 2013 to 2015 with almost $12 billion in sales in 2015. Interestingly, studies show that people who do not have Celiac disease are the biggest purchasers of gluten-free products. Consumer surveys show that the top three reasons people select gluten-free foods are for “no reason,” because they are a “healthier option,” and for “digestive health.” For those who are not gluten-intolerant, there is no data showing a specific benefit in following a gluten-free diet, particularly if processed gluten-free products become the mainstay of the diet. In fact, research following patients without Celiac disease who change to a gluten-free diet shows an increased risk of obesity and metabolic syndrome. This could be partly due to improved intestinal absorption, but speculation has also focused on the low nutritional quality of processed gluten-free foods that may contain refined sugars and saturated fats and have a higher glycemic index.

The bottom line is that most of us do not have a gluten intolerance or gluten allergen.  99% of us do not need to follow a gluten-free diet despite the numerous ads, articles on social media, celebrities who are Gluten-free, and diets promising major weight loss.   Gluten has been a part of our diets for centuries and will continue to be in our diets; gluten is not the enemy.  For those who are part of the 1% or who have substantial symptoms that make you question a gluten allergen, please see a medical provider.   A true gluten allergen requires a medical diagnosis.   Finally, if you eliminate gluten because of a true allergen or if you have eliminated gluten un-necessarily, be careful to ensure you are not over-consuming foods that are high in sugar or fat as gluten substitutes and that you are aware of your nutrient needs.

The underlying message is simple: a balanced diet of healthy foods that correlates with your activity level is the most effective and simplest way to a healthier you.